Missed the live video stream of the recording of TCND Episode #026? Well, you can watch it right here. The show itself starts at around the 13-minute mark, but this’ll give you a bit of the behind-the-scenes of our household, as well!

Web Site Story: This Pretty Much Sums Up The Internet

Hat-tip to my college buddy Bill for posting this on Facebook. Very funny video. FYI – Be weary of some of the other videos on the site this video comes from (they appear as “recommended” at the end of this video). Skip the others, but this one really made us laugh.

On yesterday’s special Birthday Bonanza show for Jennifer, one of the surprise guests we had on to wish her happy birthday was Fr. Leo Patalinghug from Grace Before Meals.

It was very funny having him on for several reasons. Number one, he was in the middle of nowhere on a hiking trip with several seminarians and young men discerning the possibility of entering the seminary. Can I just say I’m so glad our Church has priests like Father Leo? The fact he spends so much time in prayer and leadership in helping these young men who are considering an extraordinary calling in life is so very much appreciated. And since it’s the Year of the Priest, I thought I’d just point that out.

Anyway, the photo you see here was actually taken of Fr. Leo (he’s the one in the orange shirt) with a some college seminarians and potential candidates, standing on Wolf Rock and Catoctin National Park. According to Father, he’s “getting too old for these hikes with these young bucks!”

Hmm. Too old? And he’s just a month older than Jennifer. Hmm.

Anyway, one of the other funny parts of having him call in was that a lot of people tried to cover their voices yesterday. Fr. Leo did his best Pope Benedict XVI impression, followed by an impression of Yoda. The Yoda one totally threw off Jennifer, because she then thought it was another priest friend of ours, Father Roderick Vonhogen. I had a good laugh watching Jennifer struggle to figure out who it was on the phone.

So thank you, Father Leo, for calling in and helping to make Jennifer’s day special, and thank you for all you do in your own priesthood. We pray our Church will continue to cultivate priests who give their lives so selflessly for the good of the Catholic Church and the entire world. 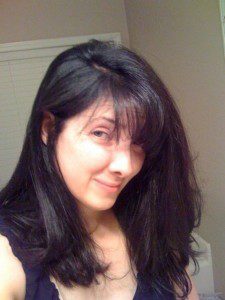 On today’s show we took caller suggestions for great books to read over the summer months.

Have any other suggestions? Leave a comment and let us know! 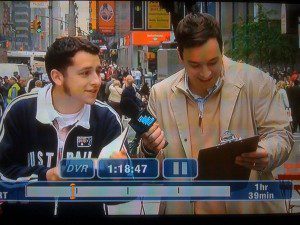 Our Producer on Late Night with Jimmy Fallon

On Friday’s show our producer Adam Hamway saw a Twitter alert (by the way way – you can follow Jennifer and me on Twitter, as well) from comedian Jimmy Fallon from Late Night on NBC.

Anyway, according to the Twitter alert, Jimmy announced he’d be in Times Square looking for people who could do impressions of famous people.

Adam does several. In fact, he regularly will appear on our show as various political figures and other celebrities, including the Easter Bunny!

Well, Adam ditched our show on Friday since it was starting at exactly the same time that Jimmy Fallon was looking for people, but he called in from Times Square as he was waiting.

Apparently, Jimmy Fallon challenged Adam on just about every name Adam had on his list of impersonations and it seems he made quite an impression on Mr. Fallon.

Last night, they aired all of the different impersonations from various people on the streets of New York and Adam was shown three times. At the end of the segment, as they went to break, Jimmy said in regards to Adam, “That one guy was incredible. We’ll have to work with him again.”

Needless to say, I imagine Adam’s spirits are probably soaring this morning.

Congrats to Adam. Here’s the video of Adam on last night’s show:

On today’s program we discussed several free resources for protecting your children online. Here are some links from a recent PCWorld Article:

I just took some quick screen shots of the apps on my iPhone since we were talking about phone apps on the show today. Here they are. Any others you’d suggest?

Kissing the Face of God

Every once in a while we get a surprise package in the mail and we’re not quite sure where it came from or who sent it.

Today during the program, FedEx showed up delivering a big ol’ box.

During a break I rushed down and got it, and during the next break I opened it up.

Inside was one of the most beautiful paintings we’ve seen. Whoever sent this – thanks!

It’s called “Kissing the Face of God” and was sent from “Lord’s Art” in New York.

Here’s a link, and below is a clearer photo of the painting from their website.

What an outstanding time we had in New York. I’d hoped to post photos throughout our trip, but simply didn’t have any time. We went non-stop ever since we woke up Wednesday morning and we are exhausted!

Major thanks to everyone from The Catholic Channel for such hospitality.

The highlight of the trip? At first I’d say swapping shows with Lino on Wednesday would be the highlight, but then sitting down with all of The Catholic Channel hosts on Thursday along with Edward Cardinal Egan most definitely topped the list. Definitely a very humbling moment in our lives right then, and such a tremendous, tremendous honor to be included among such company.

But one thing, overall, that I’m most grateful for is the chance to spend so much time in person with our crew. Adam (our producer) and Jackie (our board operator) are the best.  Adam took us out for burgers and milkshakes Wednesday night, Jackie treated us to Italian on Thursday, Adam and Jared (Lino Rulli’s producer) took us out for pizza after the show on Friday.  On top of all that, Adam brought in the most amazing donuts in the world not just once, but twice.  Truly incredible baked delights.

So now here are all the photos I took with my phone while in NY. Jennifer has more we’ll post later on.

On the plane leaving Atlanta with my mom in tow to help watch Lily while we were on the air:

Here’s us in the taxi on Wednesday, heading into the city.

Another cool thing was getting to spend some time joking around with Gus Lloyd. I don’t think I’ll ever again hear the theme to The Courtship of Eddie’s Father without thinking of Gus. Here’s Gus in the NY studio on Thursday morning.  This was the first time we ever saw each other in person:

Another one of Gus:

Jennifer and I during the broadcast on Thursday:

Things are going well.  Thumbs up!

Thumbs up from Adam and Jackie, too:

Adam’s girlfriend, Brittany, brought in the first batch of donuts.  Seriously, the most amazing donuts ever:

Jackie being goofy during Thursday’s show:

The view from my mic in The Catholic Channel studio:

We stopped by the Channel on Thursday evening to be on Busted Halo with Fr. Dave Dwyer.  Robyn, his producer, was too awesome and took Lily for a tour around Sirius/XM while we were on the air with Fr. Dave:

On Fridays, like most other days, Adam doesn’t work during our show (joke! well, sort of):

Jackie explaining to Adam how he was driving her insane:

The cast and crew.  Jennifer and Greg in the back, Jackie and Adam in the front.

In the taxi, heading out of New York through Times Square.  This is Friday afternoon right when the storms were causing havoc.

After several hours at LaGuardia, we learned our flight was canceled until Saturday morning, so we ended up staying at a different hotel near the airport and went and got something to eat.  My mom ordered the largest glass of wine ever served to a woman from North Dakota:

Saturday morning in the new hotel, checking email and hanging with the baby girl:

At the gate, waiting to board, Jennifer talking to her mom.

And now we’re home, exhausted, with an overgrown yard calling my name. 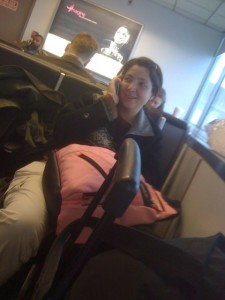 We’re currently in a taxi making our way to our hotel, and from there over to the Sirius/XM studios.

Lino Rulli is currently hosting an April Fool’s edition of our show and we’ll be hosting The Catholic Guy later this afternoon.

It’ll be a busy few days at The Catholic Channel studios but we’re excited to be here.

Oh yeah, and Lily did AWESOME on the flight.

We’ll be posting photos a plenty so keep checking back!

You’ll Be Paying For More Human Destruction on Monday

And here’s another incredibly biased report, but one that also points out a lot of stuff the mainstream media in their glee isn’t telling you.

For example, from the LifeNews.com article: “Expecting the executive order, National Institutes of Health officials indicated last month that they had already started working on the paperwork necessary to begin funneling public funds to projects involving the use of embryonic stem cells.

He added that some of the $10 billion the NIH is getting from the economic stimulus bill could be used to fund embryonic stem cell research.”

In the meantime, if you’re pregnant and want to make a real difference in someone’s life, please consider donating your baby’s umbilical cord blood.  FOR FREE.  Visit here to find out how. 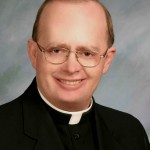 Do you use Twitter?  We’ve been posting updates on Twitter for over two years now, but there suddenly seems to be a surge in popularity again, particularly among Catholics.

Here are a couple of websites where you can find lists of Catholics using Twitter: